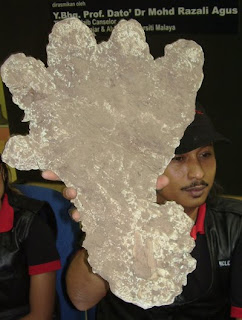 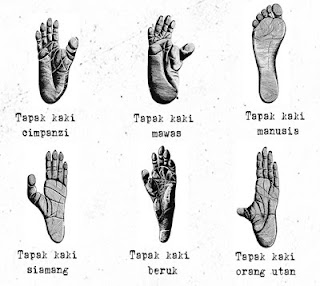 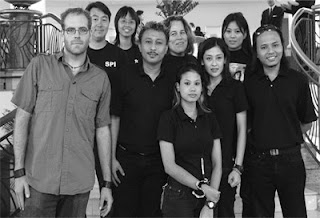 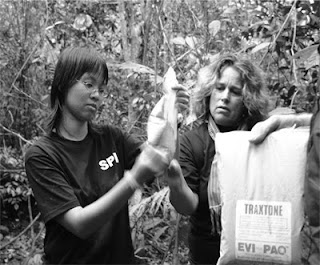 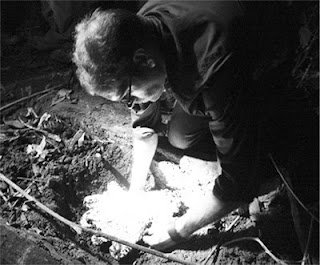 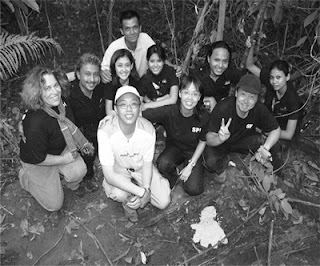 
The unknown world: How I tracked Bigfoot through the Malaysian jungle 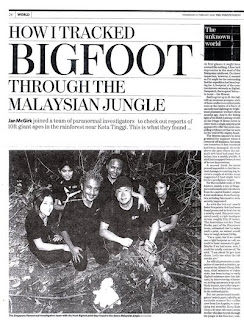 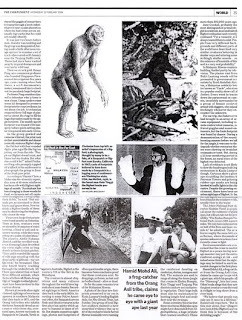 Jan McGirk joined a team of paranormal investigators to check out reports of 10ft giant apes in the rainforest near Kota Tinggi. This is what they found...
Wednesday, 22 February 2006

At first glance it might have seemed like nothing. A four-inch impression in the mud of the Malaysian rainforest. On closer inspection, however, it seemed as if it might be the astounding find the expedition had been hoping for. A footprint of the creature known variously as Bigfoot, Sasquatch, the tropical Yeti or - to locals - the Mawas.

Said to grow up to 10- feet tall, with an awesome armspan, a trio of these undiscovered hominids were at the centre of a flurry of unconfirmed sightings by frightened plantation workers three months ago. And in the fading light of the Bukit Lantang woods on the fringe of dense forest in Johor state, a single splayed print appeared to offer the most compelling evidence yet that we were on the trail of the mighty beast.

The Mawas appears to have grabbed for support when it teetered off-balance, because tree branches 11 feet overhead had been damaged, directly above the spot where the animal's left heel had sunk four inches into a muddy puddle. A stick had snapped beneath one of its toe depressions.


Bigfoot News - Free videos are just a click away

A second fresh footprint proved impossible to find but recent damage to a rotting log, located a couple of strides away, suggested it had might have borne a prodigious weight.

For the excitable team of Yeti hunters, mainly a mix of Singapore enthusiasts and volunteers from the capital Kuala Lumpur it was vindication. Even the sceptics, including this reporter, were secretly impressed.

As with the two extremely faded footprints that had been found preserved in fresh tar on a nearby road, this print measured nearly a triple handspan across, roughly 11 by 19 inches. The Australian tracker Tony Burke, part of the Singapore team, estimated that to make such a print, an animal would have to weigh at least 240kg.

"I'm a cynic, but if we could see a right footprint as well, we could at least measure its gait. Maybe if we had some scat, I could be totally convinced," he said. "I am about 50 per cent there. Let's see what the lab results are."

An official government committee of research scientists, appointed by Abdul Ghani Othman, chief minister of Johor state, has been trying to verify Bigfoot's existence since late January, by interviewing witnesses, setting upcamera traps in its likely haunts, and collecting evidence from tribal informants in the national parks.

But our paranormal investigators' search party, tailed by an excitable science-fiction film crew from Los Angeles, was anything but stealthy. Kong Kam Choy, a 40-year-old construction worker who likes to trek through the jungle in his free time, convinced the gaggle of researchers to tramp through a leech-infested grove near a palm plantation where he had come across unusually big tracks that he could not readily identify.

It was just two hours before dusk, thunder was rumbling and the group was disappointed, having made a futile afternoon voyage upriver to examine a set of tracks discovered on 10 January near the Tanjung Sedili creek. These had since been washed away by tropical downpours and overrun by wild boar.

Then we struck gold. Kenny Fong, an e-commerce professor who founded Singapore Paranormal Investigators five years ago, came running when Josh Gates, a sci-fi documentary maker, summoned him to check out the peculiarly large footprint.

Professor Fong considers himself a debunker who is keen to spot a hoax. Using a police crime scene kit designed to preserve footprints for court evidence, he set about the job. A technician required three full bags of plaster (at about 1lb a bag) to fill the huge depression made by the single footprint. The muddy size 20 footprint was doused with hairspray before quick-setting plaster was poured into each crevice.

As the group gawked and cameras whirred, the print took on that unmistakable and almost comically ominous Bigfoot shape - the flat foot with four rounded digits, plus a gorilla-like big toe jutting out from the side. "People say Bigfoot doesn't exist, and I have had my doubts. But what else could it be?" asked Professor Fong, who promptly toppled off a hillock in his excitement to photograph the group in front of the fresh paw print.

According to Vincent Chow, a Malaysian bio-diversity expert, this area of diverse rainforest has been rife with Bigfoot sightings all month. "An elephant has been foraging in those woods for food, so farmers set off explosives to frighten it away from their fields," he said. "But animals get accustomed to these blasts and ignore them. Now we think a Bigfoot family of three may be shadowing the elephant, who clears the way.

"Fourteen large footprints were found nearby on Saturday. Then at 4am, workers were awakened by 10 minutes of weird hooting, a kind of call and response session, while they were asleep at a palm oil plantation." The planter, Abdul Rahman Ahmad, said his terrified workers at Komping Lukut described the eerie night cries as long drawls in three distinct pitches. "They said it sounded like squeals of wild pigs mixed up with the deep barks of gibbons - but not like owls," he recounted. They also heard heavy crashing through the underbrush. Mr Chow speculated that at least three different animals, which the local tribes call Hantu Jarang Gigi, or "snaggle-toothed ghosts", must have been involved in this curious chorus.

Historical records show eight claimed sightings of enormous apemen in southern Malaysia that date back to 1871, and the Orang Asli tribes who inhabit the forest famously dread an encounter with these shy, oversized apes, known variously as Sasquatch in Canada, Yowie in eastern Australia, Bigfoot in the western US or the Yeti in the Himalayas.

The creature is almost ubiquitous and many cultures throughout the world have legends about man-beasts. Recorded sightings in North America date back to the early 1800s. According to some Native American tribes, the Sasquatch are not flesh-and-blood creatures in the first place but spirits which appear to humans in times of crisis. But despite numerous sightings, photos and footprints of often questionable origin, there has never been conclusive proof that these creatures exist. No droppings, no bones, no hair and no bodies found - alive or dead.

So far the same remains true of the Malaysian Mawas.

A photo of the clear new footprints preserved in tar ran in Kuala Lumpur's leading English daily, the New Straits Times, last Sunday. One group of local Bigfoot-stalkers claimed to have unearthed evidence that up to 40 of the reclusive black-furred Mawas hominids were roaming the rainforest feasting on rambutan, durian, mangoes and fish. The animals are said to range all along the dense jungle that connects Endau Rompin, Kota Tinggi and Tanjung Piai districts and are not exclusively vegetarian. Their huge bulk must also be maintained by hunting jungle fowl and mule deer near the swamps.

Some scientists theorise that these enormous Malaysian apes might have descended from Gigantopithecus, a huge primate that roamed southern China more than 300,000 years ago.

Jane Goodall, probably the most distinguished primatologist in academia, is an unabashed Bigfoot enthusiast and recently confessed: "I'm a romantic, so I always wanted them to exist. People from very different backgrounds and different parts of the world have described very similar creatures behaving in similar ways and uttering some strikingly similar sounds ... so the existence of hominids of this sort is a very real probability."

In Malaysia, Mawas-mania is building, fuelled partly by television. The plaster cast from Bukit Lantang woods will be presented to government scientists by Syed Abdullah Alattas, a Malaysian celebrity better known as "Uncle", who stars in a popular reality show called Seekers. Every week he tracks down the paranormal on camera, invariably surrounded by a group of female acolytes armed with daggers, who squeal fetchingly whenever they encounter the unknown.

For our trip, the Seekers crew had brought in an array of arcane equipment, including remote control robot cameras, infrared goggles and sound-enhancers, but the fresh footprint was found by chance. During a demonstration of the sound-boosting sensors before we left for the jungle, it was easy to distinguish whether restaurant diners were chewing on breakfast croissants or toast. But, during a 12-hour monitoring period in the forest, no aural trace of the bigfoot was detected.

Lack of evidence is not likely to slow the bandwagon building momentum in Kuala Lumpur though. Cartoons show a giant ape straddling the landmark Petronas Towers and grinning rubber-ape masks are being hawked at traffic lights in the city centre. Despite the growing excitement, there have been no urban sightings of Bigfoot. So far, the only sign of the primates has been found in the southern wilds, usually close to the water.

The Johor National Park director, Hashim Yusof, is sceptical about the existence of giant apes, but will not rule out the possibility. "The Endau-Rompin National Park covers 500 square miles. We only have information on half of the flora and fauna inside it," he admitted. The area lies in roughly the same latitude as Borneo, where thousands of species unknown to science have recently come to light.

Environmentalists are concerned that the craze to market Bigfoot as a peace-loving new-age monster may put the entire rainforest ecology at risk - and indeed some think that the sightings may be linked to environmental changes in the first place.

Hamid Mohd Ali, a frog-catcher from the Orang Asli tribe, claims he came eye to eye with a giant ape, which his people call the "Siamang", late last year. Other locals allege that they saw the giant creature cross the road at twilight or leap down from a river bank.

"We believe that people can only see it once in a lifetime," Hamid told reporters. "But in this year alone, four villagers have seen it [the Bigfoot] and we think this is because of the shrinking jungle." 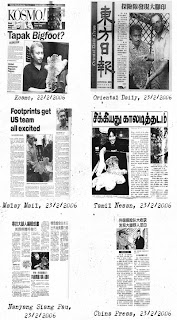 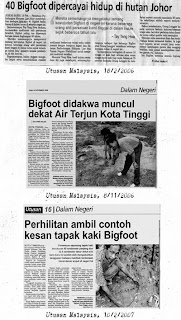 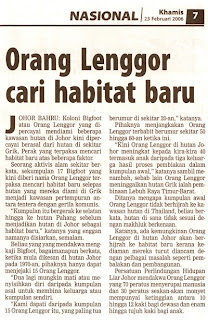 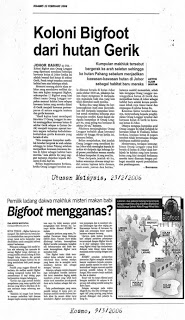 The unknown world: How I tracked Bigfoot through the Malaysian jungle
Posted by Uncleseekers at 3:01 PM

Email ThisBlogThis!Share to TwitterShare to FacebookShare to Pinterest
Labels: Bigfoot