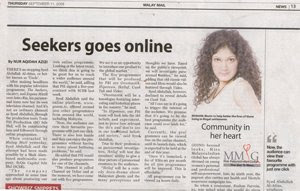 After making headlines with his popular television programme, The Seekers, via ntv7, and Expose Mistik over Astro Ria, his paranormal team now has its own television channel. And it’s not an ordinary channel as Syed Abdullah, through the the production team Team PSI Production (M) Sdn Bhd, will be entertaining fans and followers through online programmes.

When contacted by Malay Mail yesterday, Syed Abdullah said the attempt had been made possible by a Shah Alam based multimedia company, Syqic Capital Sdn Bhd (SCSB).

“The company approached us some time ago about producing our own line programme.Looking at the latest trend, we think this is going to be great for us to reach for us to reach a wider audience around the world,” he said, adding that PSI signed a five-year contract with SCSB last week.

Syed Abdullah said the online platform, www.yoonic.tv, offered around the world, including Malaysia.

“Now, the audience can view their favourite programme with just one click. There is also less hassle and they can enjoy the programmes without having to worry about buffering problems,” he said.

He added that PSI would also produce programmes for one of the channels.

“The channel is called Channel 99 Debar and at the moment, we have come out with five programmes, We see it as an opportunity to introduce our product to the global market.”

The five programmes that will be produced by PSI are Onomastik, Hipotesis, Iktilaf, Cuak tak and Video.

“Onomastik will be a travelogue featuring interesting and historical places in the country, ” he said.

“In Hipotesis, our PSI team will look into the old beliefs and experiment, just to prove how relevant the do’s and dont’s are in our traditional beliefs and society,” said Syed Abdullah.

True to their profession as paranormal investigators, Iktilaf will test the members ability to give a clear picture of paranormal creatures to the audience.

“Iktilaf will be comedy docu-drama about Malaysian ghosts and the many perceptions and thoughts we have. Based on he public’s viewpoint, we will investigate paranormal entities,” he said, adding thet old classic videos and films would also be featured through Video.

Syed Abdullah, however, declined to reveal details on Cuak Tak.

Currently, the programmes can be viewed free on the online channel, until its launch date, whict is expected to be held at the end of this year.

“Once it’s launched, afee of RM9.90 per month for all 500 programmes will be imposed. This is affordable.”

All programmes can be viewed 24 hours daily.

Email ThisBlogThis!Share to TwitterShare to FacebookShare to Pinterest
Labels: Akhbar