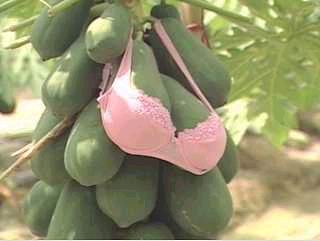 And young full-breasted (mature) maidens of equal age; And a full cup (of wine). (klik)

Muslim Mastectomy
or
The Miracle of Disappearing Breasts
Surah an-Naba' (78:33)
(klik)
Since Surah 78:33 is not a complete sentence, we quote the verses 78:31-34 so that the phrase is given in its context. For easier comparison we have put verse 78:33 in bold.

Several differences could be observed between the various versions of the Qur'an in regard to this passage (e.g. achievement, fulfillment, triumph, reward, security, success are quite a range of interpretations in 78:31). It is quite drastic, however, to discover that most of the Muslim translators are so embarrassed about 78:33 that they leave out half of the verse in their translations, hiding its real meaning. Al-Hilali & Khan are the only Muslims (we have seen) who translate somewhat truthfully, even though their translation is still tame compared to the image that the Arabic original is seeking to create in the mind of the men who are listening to the recitation of these verses. For what purpose? To rouse their sexual desire and the determination to do anything to reach this kind of paradise?

Why is this observation relevant? Muslim love to attack the Bible as a "pornographic book", because "such language is not fitting for the word of God", e.g. regarding the story of Lot, or God's condemnation of Israel in Ezekiel 23. It is however, the Qur'an that paints a thoroughly carnal paradise ([1], [2]).
Posted by Uncleseekers at 3:12 PM

Email ThisBlogThis!Share to TwitterShare to FacebookShare to Pinterest
Labels: Lain-lain